The mission of the Alaska Oil and Gas Conservation Commission (AOGCC) is:

To protect the public interest in exploration and development of Alaska’s valuable oil, gas, and geothermal resources through the application of conservation practices designed to ensure greater ultimate recovery and the protection of health, safety, fresh ground waters and the rights of all owners to recover their share of the resource.

According to Alaska’s 2015 Greenhouse Gas Inventory Report[1], more than half of the state’s total greenhouse gas emissions are generated by the oil and gas industry. By statute, the state considers any non-emergency release of oil and gas, usually in the form of venting or flaring, in excess of one hour as potential “waste”. Thus, better enforcement of Alaska’s oil and gas waste rules has long been viewed as Alaska’s “low hanging fruit” for reducing the states greenhouse gas emissions.

In the fall of 2018 Kate Troll filed a request for hearing with the AOGCC to urge the Commission to “fully enforce and strengthen existing statutes requiring Alaska’s oil and gas industry to stop all non-emergency venting and flaring from Alaska oil and gas wells”, on behalf of more than 400 Alaskan petitioners[2].  The hearing was granted on Dec 18, 2018.

Ms. Troll was joined in testimony by Lois Epstein with The Wilderness Society, Alaska and Ceal Smith with the Alaska Climate Action Network. In preparation for the hearing, Smith reviewed industry data obtained by AOGCC and identified 1,468 gas releases greater than 1 hour, in potential violation of Alaska’s waste rules[3],[4].

She and Ms. Troll explicitly asked the commissioners for an explanation of this large number of releases and to provide evidence of enforcement action. In their written response[5], Commissioners Foerster and Seamount dismissed their concerns and failed to address the 1,468 releases.  Instead they claimed the “root concern” of the parties requesting the hearing was climate change and that the agency had “no authority to act regarding that subject matter.”

The Commissioners response was in direct contradiction to Kate Troll’s testimony, that explicitly stated she was not asking the Commission to address climate change:

To start I want you to know that while the topic of climate change will enter this hearing, we are not asking you to enlarge your mission.  We do not seek mission creep, we merely ask that you urgently and competently enforce AS. 31.05.095 which prohibits the waste of oil and gas and regulation 20 ACC 25.235 (b) which defines waste as gas released, burned or permitted to escape into the air. Because that gas which escapes is mostly methane, a greenhouse gas about 30 times more potent than carbon dioxide over the long-term and almost 90 times more potent over the short-term, the matter of climate change enlarges the public interest behind your existing mission. In other word, it’s not mission creep we seek but mission urgency.

In response to the AOGCC failure to address substantive issues raised during the Dec 18 hearing, three citizen groups; the Alaska Institute for Climate & Energy, Ground Truth Trekking and Alaska Community Action On Toxics filed a new request for a hearing[6] with the AOGCC on March 20, 2019 specifically lodging a complaint of waste.  Eleven months later, they have still not received a response.

In the interim, the group filed an information request with AOGCC in order to investigate the facts behind the releases.  Preliminary findings show that between January 2012 and October 2018 industry flared or vented, on average 3,240,000 Mcf (thousand cubic feet) of gas per year.  BP and Hilcorp were the biggest emitters. BP vented or flared 2,300,000 Mcf per year on average from its large North Slope operations and Hilcorp (with far fewer wells and infrastructure) vented or flared 400,000 Mcf per year on average between 2012 and 2019 (see Figure 1). 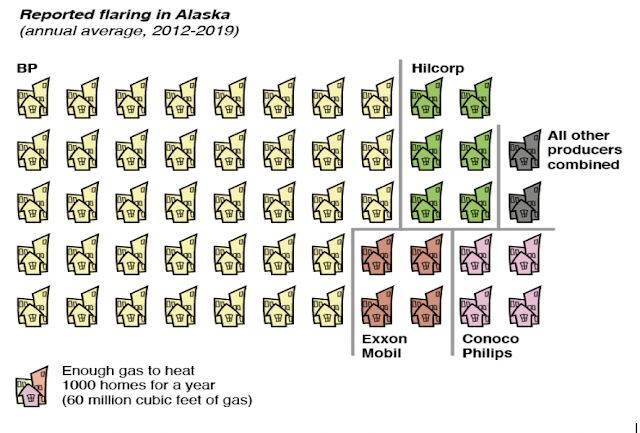 But that’s not the full story. A 2019, the US Department of Energy (DoE), Office of Oil & Natural Gas Regulations reported far higher levels of venting and flaring in Alaska, between 42% and 74% higher than industry reported to the AOGCC between 2013-2018[8] (see Table 1 and Figure 2 below).

Despite several calls to State and Federal agencies, we’ve been unable to get an explanation for the significant gap between the DoE and AOGCC reports. These discrepancies, and the AOGCC’s failure to address citizen concerns, raise far more questions than they answer.

Table 1. US Department of Energy Alaska Natural Gas Flaring and Venting Regulations, May 2019

As a recent New York Time’s story indicates[10] excessive flaring and venting are continuing unabated by major oil companies that also operate in Alaska. Our analysis and interaction with AOGCC indicate the same is happening here. Companies are burning massive amounts of natural gas unabated and with little to no oversight or enforcement whilst aggressively seeking to rollback bonding and regulatory requirements[11]. 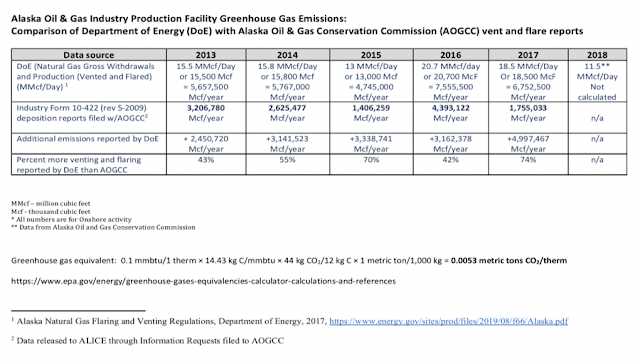